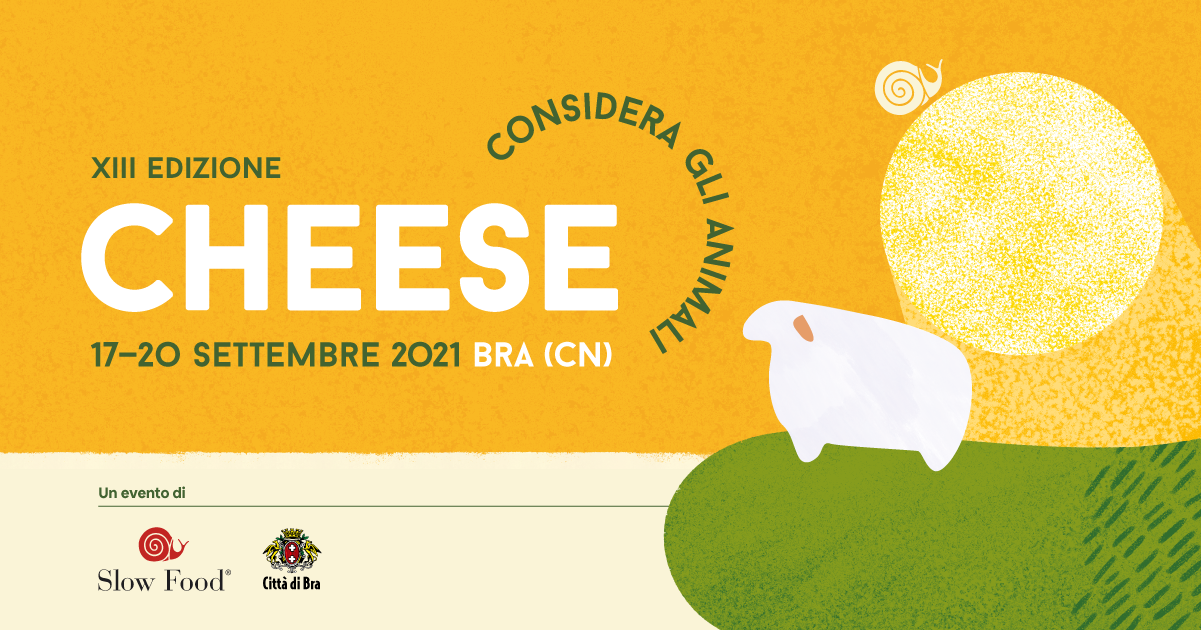 “If there were no animals, there’d be no cheese, nor much of anything else. That’s why we’re putting animals center stage of our program: to raise public awareness of the urgent need to adjust our relationship with nature and the animal world.” Serena Milano, General Secretary of the Slow Food Foundation for Biodiversity, presenting the 13th edition of Cheese  – the largest international event dedicated to raw milk cheese and dairy products, to be held in Bra, Italy from September 17-20 this year. This year’s theme: Consider the Animals.

To find out more about the themes and protagonists of the festival, look no further than the website. The first part of the event program (with tickets on sale for seated events) will be released on July 21.

“A study by the Weizman Institute in Rehovot, Israel on the biomass of mammals on the surface of our planet, found that humans account for 36% of the total weight, while farm animals account for 60%, and everything else now accounts for just 4%,” Milano continues. “That 4% is all the elephants, bats, bears, birds… and 60% is a handful of farm animal species. It’s a scary figure and one we often can’t really comprehend. Where are all these farm animals? We rarely see them, because they’re mostly kept indoors in massive sheds.” What does that have to do with cheese though? A lot, as it happens. “In the last 30 years Italy has lost 90% of its herders, wiped out by the ever-tightening grip of the dairy industry.”

Yet if we think of the animal world in relation to cheeses, we can’t stop at cows, sheep or goats. We need to ask ourselves how other living organisms contribute to the long and complicated process which gives us cheese: not just dairy animals, but pollinating insects, and the microorganisms in the soil, like fungi, bacteria and yeasts.

A stage for ideas and values

Cheese has been a unique chance to taste and buy the world’s finest cheeses since its first edition. But the festival is about much more than that. It’s a space for discussion, where the people fighting to safeguard our precious dairy heritage unite to share ideas and struggles. As Barbara Nappini, newly-elected President of Slow Food Italy, put it: “In 1997, when we started, there was no talk of raw milk in Italy. At that time, the herders and cheesemakers who worked with raw milk were essentially clandestine. Most people accepted pasteurized cheeses as normal. We, the supporters of raw milk, have won that battle; the recognized delicacies and excellences of the Italian dairy scene are made with raw milk.”

Over the years Cheese has been the stage for the values of those who believe in conserving and promoting the biodiversity of the pastures; those who fight against the homogenization of dairy products by big industry. Nappini reminds us: “In 2015 the battle was against the use of powdered milk in the production of cheese, and in that case too we shifted the ground.”

Today Slow Food believes in opposition to the use of industrial ferments in cheesemaking, as President of the Slow Food Foundation for Biodiversity, Piero Sardo, comments. “At Cheese 2021 the vast majority of the cheeses will be natural, apart from some rare exceptions which are inevitable for their protocol, for example gorgonzola, which is in any case an extraordinary cheese. This year we’ll insist once more on theme of raw milk and natural cheese, and all the invisible biodiversity it represents.”

Numerous international affineurs and selectors have confirmed their presence at Cheese 2021. Driven by a desire to return to conviviality, there’ll be an increasingly strong presence of international producers, particularly from Belgium, France, Germany, the Netherlands, Portugal, Spain, Sweden, Switzerland and the United Kingdom. Cheeses will play the starring role, but there’s plenty of space on stage for honeys, fruit preserves, and a selection of natural cured meats from Slow Food Presidia, as in 2019. There’ll be Dinner Dates in Pollenzo, and unmissable Taste Workshops which put an even firmer focus on the relationship between producers and cooks; incredible dishes made with ingredients that were produced as they should be. There’ll be moments of reflection on the state of play worldwide too, and these will be held both online, allowing an international audience to participate, and at the Biodiversity House.

Cheese 2021 represents another step on the return journey to conviviality. It will be the first international Slow Food event held in person since we were forced to rethink our plans for Terra Madre Salone del Gusto 2020 and Slow Fish 2021.

See you in Bra!

Cheese 2021 is organized by the City of Bra and Slow Food. The event has been made possible by the support of companies who believe in the values and objectives of the event, including Main Partners: BBBell, BPER Banca, Consorzio del Parmigiano Reggiano, Egea, Pastificio Di Martino, Quality Beer Academy (QBA) and Reale Mutua.